Abe Abraham on Thinking Your Way Out of the Ditch 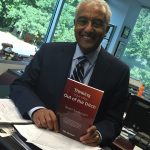 I’m pleased to wholeheartedly recommend Abe Abraham’s new book, Thinking Your Way Out of the Ditch, which Abe describes in the podcast he recently recorded for www.extraordinaryceo.com.  Abe’s book tells a dramatic, inspiring and instructive true story:  building a highly successful business, CMI Management, from the ground up, reaching annual revenues of $68 million; suffering catastrophic failure – most notably the loss of a contract that reduced annual revenue by almost 87 percent  (to $9 million); and eventually, with the help of his tremendously supportive wife Azzi, digging his way out of this deep ditch, restoring his company’s  financial health and getting it back on a growth path.  Thinking Your Way Out of the Ditch is about the facing a daunting challenge squarely, relying not only on hard-nosed business planning, but – just as important – on deep self-understanding, strong faith, and large dollops of courage and self-discipline.

I’ll let Abe flesh out the details in his podcast, but let me tell you why featuring Thinking Your Way Out of the Ditch  in this blog gives me such intense pleasure.  You see, Abe (then known by his Ethiopian name “Abebe”) was one of my outstanding students at Tafari Makonnen School in Addis Ababa, Ethiopia, where I served for three years as a Peace Corps teacher several years ago.  After returning to the States, I eventually lost touch with Abe and feared that he’d been killed during the reign of terror that followed Emperor Haile Selassie’s overthrow.  So I was astounded when Garber Davidson, a fellow Peace Corps teacher at Tafari Makonnen, called a week before the Peace Corps 50th anniversary celebration in September 2011 in Washington, DC to tell me that one of our former students would be accompanying him to the lunch our “Ethi III” Peace Corps training group was holding during the celebration.  He thought I might remember Abebe Abraham (now known as “Abe,” he said), who’d built a highly successful company based in the DC area.  Thunderstruck, I asked Garber to hold on a minute while I went to the filing cabinet in my study holding my Peace Corps memorabilia.  I was virtually certain that I’d find an inscribed photo that Abebe had given me shortly before I returned to the States.  I’d carried the photo, along with other keepsakes, from city to city over the years.  What made Abebe’s photo so special was not only that he’d been an outstanding student at what was considered the finest secondary school in Ethiopia, but that he was one of only two students who’d given me their photos my last week in Addis.  What were the odds of our paths crossing so many years later?

When you listen to Abe talking about Thinking Your Way Out of the Ditch in this podcast, I’m sure you’ll want a copy for your library.  And if you find the book as informative and inspiring as I did, by all means recommend it to your colleagues.