The Blind Visionary Reaches Out Aggressively 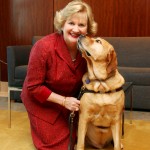 Virginia Jacko is one of the most extraordinary CEOs I’ve ever worked with.  Not only did she start all over again as a vocational rehabilitation student at the Miami Lighthouse after losing her eyesight while serving as a senior financial executive at Purdue University, reporting directly to the President and Provost, within three years she became the Lighthouse’s first blind CEO.  On her watch, the Lighthouse, which has significantly diversified its programs and grown its revenues, has received its eighth consecutive 4-star rating – the highest possible – from Charity Navigator, placing it in the top 2 percent of U.S. charities.  In this first of four podcasts that Virginia has recorded for this blog, Virginia talks about one of the most important keys to her success:  reaching out aggressively.

On a personal note, I’ll never forget my first meeting with Virginia Jacko.  The following account is adapted from the book we co-authored three years later, The Blind Visionary (www.theblindvisionary.com):

Virginia Jacko and I first met face-to-face on September 14, 2006, although we had talked several times by phone over the prior month.  When my taxi from the airport arrived at the Miami Lighthouse For the Blind and Visually Impaired at 8 a.m. that day, I was feeling uncharacteristically apprehensive.  The purpose of my first visit to the Miami Lighthouse was to officially kick off a major project – we called it the “High-Impact Governing Initiative” – aimed at strengthening the governing role, functions, and structure of the Lighthouse Board of Directors.  In a few minutes I would be meeting Virginia, who had been the Miami Lighthouse’s first blind president & CEO since June 2005, after serving in an interim, pro bono capacity for the prior four months.  Most consultants probably feel a slight tingle of danger at the prospect of working with a whole new cast of characters when beginning a new engagement, but I had an unaccustomed case of nerves when I got out of the cab that morning.

In retrospect, I realize my trepidation had to do with Virginia’s being blind.  Although I had briefly interacted with a handful of blind people in various consulting engagements over the years, I had never worked closely with a blind chief executive in my twenty-five years of nonprofit consulting. So on the taxi ride from the Miami Airport, I found myself worrying about small things that seem a bit silly in retrospect.  Was the subject of her blindness off-limits, or would it be appropriate to ask her about the history of her losing her sight?  If we walked down the corridor together during my visit, should I take her arm?  During the buffet lunch that was being served in the conference room during my meeting with Virginia and her top executives, should I offer to fill Virginia’s plate?  Not knowing the rules of etiquette really bothered me, since unwittingly committing a faux pas is not my custom, and the last thing I wanted to do was offend my new CEO client.

So I announced myself at the front desk in the Lighthouse atrium that September morning in 2006, keenly anticipating my first in-person meeting with Virginia Jacko, but feeling unusually apprehensive as well.  Informed that Virginia was on the phone and would be out to meet me in a few minutes, I began to stroll around the spacious reception area, looking at the photos of current and past Board chairs, reading the framed letter from Helen Keller, admiring the donated oil painting by a prominent and much-in-demand Miami artist, Romero Britto, and glancing into the large conference room where a class of some kind was being held.  Probably ten minutes had passed when I was startled to hear “Doug Eadie, it’s great to meet you at last!”  Turning around and seeing Virginia for the first time, I was taken aback.  “She is blind, isn’t she?” I thought to myself.  “Of course she is, you idiot, there’s her guide dog.”  But for a couple of seconds, seeing her radiant smile, her bright blue eyes looking directly at me, her outstretched hand, I wasn’t sure.  After I walked over and we shook hands, Virginia turned and led the way down the corridor to her office, her guide dog Tracker at her side, briefing me on the day’s agenda as we walked, and after returning a couple of phone calls, she gave me a personal tour of the Lighthouse.  Thus began a close professional association that has been enriched by our becoming friends and now includes our creative collaboration in co-authoring this book.