CEOs Leading From Their Bully Pulpit 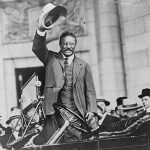 Over the holidays, I re-read Doris Kearns Goodwin’s The Bully Pulpit, a superb study of the Progressive Era and the administrations of Presidents Theodore Roosevelt and William Howard Taft.  According to Goodwin, Roosevelt coined the term “bully pulpit” to describe “the national platform the presidency provides to shape public sentiment and mobilize action.”  Roosevelt made full use of the pulpit his presidency provided, including his remarkable nine-week transcontinental train trip covering 14,000 miles across 24 states and territories in 1903.  Focusing on a small number of issues he passionately embraced, including corporate trusts, the tariff, and environmental protection, Roosevelt delivered 265 speeches during his amazing odyssey.  Enthusiastically reaching out to his fellow citizens proved well worth the huge expenditure of time and energy, witness the impressive accomplishments of Roosevelt’s second term.

Some of my readers might be tempted to think of the bully pulpit as the exclusive preserve of our nation’s chief executive, but experience has taught that it can be a powerful tool at the local level.   Mounting the bully pulpit has proved to be a wise investment of time and energy for chief executives of organizations that are heavily dependent on wide public understanding and tax support.  Of course, public school districts and transportation authorities come immediately to mind.  Large and highly complex (both operationally and financially) public enterprises, they not only defy easy understanding, their image has also taken a real beating in this era of widespread and growing skepticism of public institutions.

Over  the past quarter-century I’ve worked with a number of school superintendents and transit CEOs who have made highly effective use of the bully pulpit to build public support for tax issues their boards have put on the ballot.  Four preeminent factors appear to account for their success at the podium: