Cultivating the Art of Serendipity 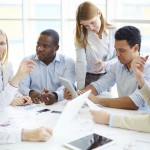 The CEO of an aging services nonprofit I was working with around four years ago established a task force consisting of nine executives and senior managers to come up with a comprehensive strategy for strengthening management of the organization’s relationships with key  stakeholder organizations in the community, such as sister aging services nonprofits and the community hospital.  The plan was for the CEO to review the task force’s recommended strategy with the board’s community relations committee, which would bring it to the full board for approval.  A critical step in the strategy formulation process was the task force’s assessment of existing high priority stakeholder relationships, based on task force members’ one-on-one interviews with the CEOs of the key stakeholder organizations.

A really well-crafted strategy to strengthen this nonprofit’s management of its relationships with important stakeholders was ultimately adopted by the board and successfully implemented, and my former client has reaped some significant benefits in the 2 ½ years since the board acted. But this isn’t the full story I want to share.  Shortly after my former client’s task force had finished interviewing stakeholder CEOs and analyzing the results – six weeks or so before the task force submitted its recommended strategy – the department head chairing the task force requested a meeting with the CEO.  She alerted him to an opportunity that had emerged from her interview with the CEO of a sister aging services organization:  to co-design and present a joint professional development program focusing on innovation and change management – to be partially funded by a foundation grant.  As it turned out, not only was the staff development program successfully implemented, it has led to a series of powerful jointly presented programs in other areas, such as human resource management and external relations.  And as this is being written, the two nonprofits are actively exploring a possible merger in order to grow services and revenues while realizing administrative cost savings.  A powerful spinoff, indeed, of the task force initiative!

The true story I’ve just recounted popped into my mind as I was reading Pagan Kennedy’s fascinating article in the January 3 issue of the New York Times, “How to Cultivate the Art of Serendipity.” I’d always thought of serendipity as a stroke of good fortune that one hasn’t consciously expected, much less sought or earned.  But Kennedy cites research suggesting that it might be possible to train ourselves – and others – to become “more serendipitous” – to “cultivate the art of finding what we’re not seeking.”  In other words, to “do” serendipity, not just experience serendipitous happenings.  She even proposes creating a new field, what she calls “serendipity studies,” creating a body of knowledge about how “to stumble upon new and better ways of getting lost.”

I can think of other examples of nonprofits capitalizing on unsought-for opportunities over the course of my 25 years of work with nonprofit leaders, and I’m sure many of you can, too.   But I’d love to hear from those of you who have actually cultivated serendipity in your organizations, turning your staff members into true “serendipiters.”