The Extraordinary CEO as Energizer-in-Chief 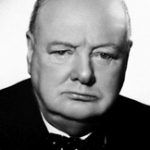 Let us therefore brace ourselves to our duties and so bear ourselves that, if the British Empire and its Commonwealth last for a thousand years, men will still say, “This was their finest hour.”

This is British Prime Minister Winston Churchill speaking in June 1940, after French resistance to the Nazis crumbled, inspiring his dispirited and frightened people – magnificently carrying out what I call the CEO’s “Energizer-in-Chief” role.  While Churchill provides more than one splendid example of the Energizer-in-Chief in action on the global stage, you should keep in mind that that many if not most CEOs will over the course of their careers be called on to play this critical leadership role in less august settings.

A decade ago I was fortunate, wearing my coaching hat, to observe up close a truly extraordinary CEO doing a superb job of playing the Energizer-in-Chief role.  The CEO I was coaching had been at the helm of a countywide 30,000-student community college in a major metropolitan area for only three months when, that November, voters resoundingly defeated the college’s sales tax issue, which was a key piece of the funding puzzle for construction of a third campus in the western suburbs.  The sales tax campaign had been well underway when the president arrived on the scene the prior August.  Overseen by the college foundation board and coordinated by the college’s director of development, the meticulously-managed campaign included a countywide business advisory committee and teams made up of faculty and administrators from the two campuses that campaigned door-to-door throughout the metro area.  Campaigners were armed with attractively produced literature documenting the tremendous economic and social impact of the college during its first twenty years, and countywide polling indicated that the college was widely known and admired, making passage of the tax look like a slam-dunk.  So the defeat that November (52 to 48 percent) wasn’t just surprising, it was devastating.

At a half-day meeting involving the college and foundation boards and the executive team the week after losing at the polls the president  strongly recommended that the issue be put back on the ballot in the coming spring election.  The case for a third campus was so compelling in terms of the unmet demand for affordable postsecondary education in the western suburbs that an overwhelming majority agreed to launch a new campaign in January to pass the tax issue in May. But several participants questioned whether – so soon after a devastating defeat – enough emotional energy could be mustered for a winning campaign in a time of widespread opposition to new taxes.  The president promised that he would visibly, aggressively lead the new charge, uplifting wounded spirits and re-kindling passion, and as it turned out, he played the Energizer-in-Chief role with gusto during the spring campaign.

The victory owed much to the passionate advocacy and tireless door-to-door campaigning of the teams of faculty members and administrators.  And their passion was without question the result of the president’s personal involvement as Energizer-in-Chief.  In countless meetings at headquarters and on the two campuses, he made a point of touching hearts, not just minds.  In every presentation, he reminded his compatriots of the core values that had driven the founding of the college and that still guided its educational mission, including the belief that affordable postsecondary education should be available throughout the county and that learning should be lifelong.  And he was always armed with heartwarming true stories of people whose dreams had been realized – often despite daunting barriers – because of the college, saying countless times that “we’ve always been in the business of defying odds and making dreams come true.”

This story has a happy ending:  passage of the college’s sales tax issue in the May election and construction of the third campus, which is thriving as I write this.   As a close observer of the campaign, I’m 100 percent certain that the president’s personal effort, wearing his Energizer-in-Chief hat, was a key contributor to the victory.  And I’ve seen enough CEOs step up to the plate in this way over the years in challenging situations to recommend that serving as Energizer-in-Chief be added to every CEO’s formal position description.