From Tragedy To a Passionate New CEO Mission 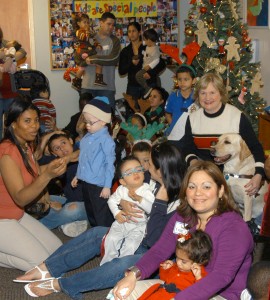 My April 1 inaugural post at this blog introduces a truly extraordinary nonprofit chief executive, Virginia Jacko, President & CEO of the Miami Lighthouse for the Blind, who is a member of our CEO Advisory Committee.  Virginia’s story is amazing.  Losing her eyesight while serving as a senior financial executive at Purdue University, she started all over again as a vocational rehabilitation student at the Miami Lighthouse in 2001, and only four years later became the first blind CEO of the Lighthouse in its long and proud history.  One of the reasons Virginia has been so successful as CEO of the Miami Lighthouse is her passionate sense of mission.  In the book Virginia and I co-authored in 2010, The Blind Visionary (Governance Edge Publishing), Virginia describes how she transformed what most people would consider an earthshaking tragedy into the passionate new mission that has fueled her CEO leadership at the Lighthouse over the past ten years.  I’ll let Virginia speak for herself:

I feel blessed by my retinitis pigmentosa – by being blind.  I didn’t ask for it, and I suppose the great majority of people would see it as a curse, or at best a very mixed blessing.  I’m not a fatalistic kind of person; you know me well enough to know that I’m not inclined to passively sit back and accept what fate has in store.  I’m a doer, an activist to the core!  But I’ve come to believe that God’s plan was for me to become blind so I could find a new mission and passion in my work.  Do you think that if someone had come to me way back in my Purdue days, before I started losing my sight, and  said, “They need a CEO in Miami at a blind agency,”  I’d  have jumped at the job?  Assuming I had no vision loss.  Assuming that I was 20/20 and playing tennis, and all that.  The odds are I wouldn’t have been interested.

I would’ve thought, “Blindness?”  I wouldn’t have gotten it. I wouldn’t have understood what it meant.  I wouldn’t have related to the Lighthouse clients.  I understood students at Purdue.  I understood the Purdue mission.  But I wouldn’t have had a clue about the mission of a social service agency serving the blind. . . . I came to the Lighthouse with some really strong skills, especially in finance, and I was blessed to have the opportunity to put them to what I now see as a higher use. . . . I’ve really found my bliss at the Lighthouse.  I’ve found tremendous passion.  I can’t really say whether I’m called in some way, whether what’s happened is part of some kind of divine plan for my life; all I know is I’m blessed to have a passion because a lot of people – maybe most people – go through life without much passion.  They just do what they do because they have to do it, because it brings in the paycheck.  But I’ve been given this wonderful opportunity to help blind people get out of the house, so that blind people just don’t say home, so that a senior losing her eyesight knows there is life after blindness, so that a little kid isn’t left at this level but learns he can go to that level. . . . . Let me tell you, my life now is so much fuller than it would’ve been if I were still at Purdue with my eyesight.  Look, how often do you really get to make a tremendous difference in people’s lives?

In future posts at this blog I will talk about four lessons that can be gleaned from Virginia’s amazing odyssey that are pertinent to nonprofit CEOs and CEO-aspirants everywhere:  reach out aggressively; act on opportunities; don’t let fear win; and keep things in perspective.  Each post will tell a true story in Virginia’s own words to illuminate the lesson.