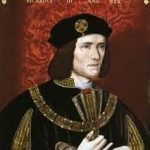 And therefore since I cannot prove a lover to entertain these fair well-spoken days, I am determined to prove a villain and hate the idle pleasures of these days.  Plots have I laid, inductions dangerous….

Ah, King Richard III:   how we love to hate him, how we shiver at his delicious villainy!  He was Duke of Gloucester when William Shakespeare put these words in his mouth in the monologue that opens his riveting “The Tragedy of King Richard the Third,” and in the play Richard soon murders his way to the throne of England, his most infamous victims being his young nephews, the sons of Edward IV:  Prince Edward and the Duke of York.

You might recall the New York Times account of Richard’s reburial in Leicester Cathedral a few years ago, only a few miles from Bosworth Field, where he was defeated and killed by the forces of Henry Earl of Richmond, who, as you’ll recall, became Henry VII in 1485, the first of the Tudor monarchs who included the extraordinary Henry VIII and Elizabeth I.

So why do we care about a villainous English monarch who reigned only two years and died 530 years ago?   Well, because Richard III’s is a cautionary story about the power of the media to tarnish, indeed destroy, a leader’s – or an organization’s – reputation.  The Tudors, with Shakespeare’s brilliant assistance, managed to paint a fallacious picture of Richard the monster that persists even today, despite there being good reason to believe that Richard III was anything but a villain.  Historians who have re-visited the sources tell us that Richard was most likely a pretty good ruler – well-intentioned, dedicated, hard-working, caring, and widely admired by his subjects.  And, by the way, there’s absolutely no proof of his most villainous alleged act, having his young nephews killed in the Tower of London.

The media at the end of the 15th Century that the Tudors so skillfully employed in creating the enduring image of Richard as a murderous monster were limited to books and the theater, but, admittedly, they benefitted from Richard’s not being around to defend himself.  In these social media days, image builders – and destroyers – have myriad means at their disposal.  It doesn’t take years, or even months or weeks to tarnish or destroy a reputation, even when the victim is alive and able to defend herself, which is why building and protecting your economic or community development organization’s image is a preeminent chief executive priority.  And these days, you’ve got to get ahead of the game, proactively shaping your EDC’s image, rather than sitting back and reacting to attacks.  It’s been demonstrated over and over again that she who speaks first tends to carry the day where image building is concerned.

So, dear CEO reader, even if you’re not a social media aficionado, at least make sure that your organization has a detailed image building and protection strategy in place and that it makes good use of Facebook, Twitter, Linkedin, blogging, and other social media tools.  And always keep in mind that good works – including your EDC’s achievements – have never spoken for themselves – they always need to be explained to the wider world, including stakeholder organizations, over and over again, making use of whatever means are at your disposal.