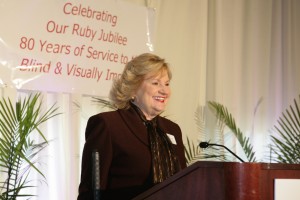 This inaugural post features a truly extraordinary CEO, Virginia Jacko, who became president & CEO of the Miami Lighthouse for the Blind and Visually Impaired in 2005.  Not only was Virginia the first blind CEO of the Lighthouse in its history, she was also a graduate of the Lighthouse’s Vocational Rehabilitation Program.  Having decided that without special training she could no longer continue her work as a senior financial executive at Purdue University, where she reported directly to the President, Virginia, who was going blind from a condition known as retinitis pigmentosa, had enrolled as a student at the Lighthouse in January 2001.  She never returned to Purdue.  Remaining in Miami after finishing her training program, Virginia volunteered at the Lighthouse, became a member of its Board of Directors, and was named interim CEO of the Lighthouse in February 2005.  Having conducted a thorough national search, the Lighthouse Board named Virginia permanent president & CEO in June 2005, on the basis of her impressive stint as interim CEO.

Since becoming president & CEO of the Lighthouse, Virginia has built an outstanding track record.  One of the most notable accomplishments on her watch has been the Lighthouse’s acquisition of the Heiken Children’s Vision Program, including its mobile vision care van, which is a fully equipped optometric office on wheels that travels to schools in low income areas.  She played a leading role in transforming the Lighthouse Board into a much more effective governing body, and has also overseen the launching of a number of new Lighthouse programs, including music production, ceramics, hot lunches for clients, fitness, and a low vision center. One important sign of the Lighthouse’s success under Virginia’s leadership is its being one of only 160 nonprofits in the U.S. that have received Charity Navigator’s highest four-star designation seven years in a row, signaling that the Lighthouse is among the nation’s most effective nonprofits.

Virginia has also been a consummate fund raiser, nurturing three $1 million gifts, which have funded the new third floor children’s wing, the state of the art sound studio, a music inclusion program for talented blind and sighted young adults, and, most recently, addition of a fourth floor to house the Lighthouse’s Educational Empowerment Center.  Virginia has become a prominent member of the Greater Miami community, being chosen as the South Florida Business Journal’s 2007 Business Woman of the Year in the Nonprofit Leader category and receiving the  2008 Quiet Storm Achiever Award in the nonprofit category from the South Florida Women’s Power Caucus, among many other honors.

Visionary, innovator, board developer, fund raiser – Virginia is truly an extraordinary nonprofit CEO.  You can read about Virginia’s experience in The Blind Visionary (www.theblindvisionary.com), and you can hear Virginia in this fascinating podcast, which describes the merger that resulted in the Heiken Children’s Vision Program.