Greenlight Pinellas: A Pothole On The Road To Ultimate Success 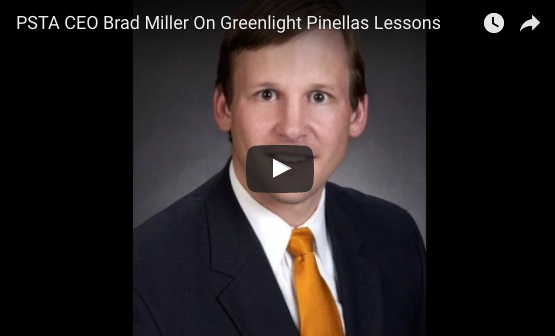 Residents of Pinellas County, Florida who, like me, are strong supporters of expanding public transportation options in this increasingly gridlocked metropolitan area were sorely disappointed in November 2014. Voters overwhelmingly defeated a ballot measure to fund – with a new 1 percent sales tax – a comprehensive transportation plan developed by Pinellas Suncoast Transit Authority (PSTA) known as “Greenlight Pinellas.” Defeat of transportation tax issues has been quite common in Florida for years, but the magnitude of the Greenlight defeat was startling in light of the meticulously crafted plan and widespread support for the ballot issue from civic, business, and government leaders. To me, the case for Greenlight was compelling, but I was clearly in the minority.

Around six months later, I was batting around ideas for a podcast with Brad Miller, PSTA’s Chief Executive Officer, when he threw me for a loop by suggesting that he talk about the Greenlight Pinellas experience. I wouldn’t have suggested it since CEOs and other high achieving people typically avoid focusing on failure of any kind. When I asked Brad if he really wanted to talk about a crushing defeat at the polls, he replied that despite the pain, he and the PSTA Board, along with the community leaders who’d campaigned for Greenlight Pinellas, had learned a number of valuable lessons from the experience that would eventually pay off in the future in terms of voter support for a more fully developed transportation system in Pinellas County.

Brad and I agreed to let the matter simmer for a few weeks before selecting a podcast topic. It just so happens that about this time I came across two books that got me to thinking about the creative potential of failure and the positive role it can play in human growth and organizational success. One was Pema Chodron’s insightful and thought-provoking little book, “Fail Fail Again Fail Better, ” which I talk about in a recent article, “Sensible Failure” (http://extraordinaryceo.com/sensible-failure/). Another was the newest book by best-selling author and prolific blogger Seth Godin, “What To Do When It’s Your Turn [and it’s always your turn].” One of Seth’s observations in the book made a real impression: “Failure’s not fun. But failure is required. Failure in the service of learning, of experimenting, of making things – this is essential.”

So we agreed that Brad would record this really informative podcast on turning the Greenlight failure at the polls into ultimate success down the road. Perhaps the most powerful lesson Brad discusses is the realization that meticulous transportation planning and strong support from civic, business and government leaders, while extremely important, can’t alone carry the day at the polls. Successfully passing transportation tax issues depends, perhaps above all else, on widespread public recognition of the value – the concrete benefits – that public transportation brings to a community. Brad points out that he and his Board no longer think of PSTA as “just a bus company” in the business of providing efficient, cost-effective service, but as a bottom line benefit that makes life in the region better for everyone.